Anthony obtained his Bachelor of Science in Business Management at the University of Phoenix in 2011. He has 25 years of milling experience specializing in soft wheat, hard wheat and other wheat blends. Anthony is also a member of International Association of Operative millers and held Chairmen duties for the Niagara District from 2007-2009. 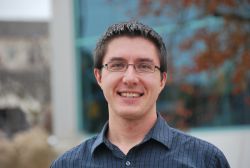 Josh Cowan is responsible for managing the Ontario barley, corn, oat, soybean, and wheat farmer members’ investments and involvement in research. Josh has been part of the Grain Farmers of Ontario research team since 2012, first as a Research Coordinator and, since 2014, as Manager, Research & Innovation. Josh has also been Project Manager for the Canadian Field Crop Research Alliance (CFCRA) since 2012, managing CFCRA partner public plant breeding research investments in barley, corn, oat, soybean, and wheat leveraged through the federal Growing Forward and Growing Forward 2 research investment programs delivered by Agriculture & Agri-Food Canada.

Josh graduated in 2011 from the University of Guelph with a PhD in plant pathology and in 2006 from Acadia University with a BScH in biology. Josh was part of the Regulatory Affairs team at Syngenta Canada for one year before starting at Grain Farmers of Ontario in 2012. Josh lives in Guelph, Ontario with his wife and two young children.

Joachim is a graduate from the University of Toronto, department of Nutrition and Food Science, Joachim is celebrating his 38th year with Griffith Foods Ltd. Established almost 100 years ago, Griffith Foods is a family owned manufacturer of food ingredients, operating in 19 countries around the world.  Working with their retail and foodservice customer partners, Griffith enhances the taste, texture and appearance of the foods consumers love. With Joachim’s extensive experience in ingredient science and process technologies across the various product categories, he has focused on bringing creative innovation to the marketplace for more than a quarter century. His many patents and applications continue to provide substantial contributions to the business and deliver on the purpose of Blending Care and Creativity to Nourish the World. His achievements, combined with passion, mentorship and leadership, has garnered Joachim the prestigious title of Science Fellow.  He participates on numerous external technical advisory committees, is an ongoing guest lecturer at several leading universities and leads Griffith Foods’ global Coatings Centre of Excellence.